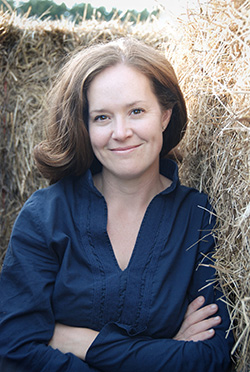 Moira Sanders lives by the mantra “food + people = happiness”. There is nothing she likes more than introducing the idea of cooking and eating real food to whoever will listen. Moira is the co-author of the award-winning, best-selling book, The Harrow Fair Cookbook, which she wrote about her hometown’s agricultural fair and heritage with her sister in 2010.

Officially her food career began after graduation from the Culinary Arts Program at St. Clair College in Windsor, Ontario, when she went on to work at some of Toronto’s and Vancouver’s best known restaurants. While earning a Red Seal certificate, Moira demonstrated her culinary abilities by winning 2nd place in the Culinary Skills Canada competition, competing against chef’s apprentices from across the country. This may have been the catalyst that started Moira down the path of becoming a passionate participant and advocate of baking and preserve contests at agricultural fairs around Ontario. She has a competitive steak a mile wide!

To further hone her skills, Moira lived in the Limousin Region of France where she taught cooking classes and managed the kitchen of a Chateau-turned-cooking school. She also spent 6 weeks studying cooking in southern India, an adventure that fueled her interest in that particular cuisine.

Along the way, Moira married and had two kids, Gavin and Ellen. It was after they came along that she found herself cooking and baking more than she ever had when she worked in the industry. She started teaching local cooking classes and eventually ended up writing The Harrow Fair Cookbook.

Moira is currently a product consultant for Provisions Food Company in Niagara and also does work for Brain Power Studio, on her own projects as well as consulting on other food-related programming. On any given day, Moira can be found in her own kitchen working on recipes, writing food stories for her website and whipping up delicious food for her family and friends.