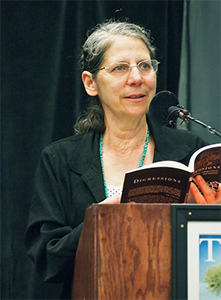 Robyn Sarah is the winner of the 2015 Governor General's Literary Award for poetry, for My Shoes Are Killing Me (Biblioasis).

Robyn was born in New York City to Canadian parents and grew up in Montreal. A graduate of the Conservatoire de Musique du Quèbec and of McGill University (philosophy and English), she began publishing poems in Canadian periodicals in the early 1970s, while pursuing graduate studies at McGill. In 1976, with Fred Louder, she co-founded a small press, Villeneuve Publications, and co-edited its poetry chapbook series which included first titles by August Kleinzahler, A.F. Moritz, Bruce Taylor, and others. The press folded in 1987.

During the same years and until 1996, she taught English at Champlain Regional College in St. Lambert, Quebec. Since 1996 she has been a frequent contributor to Canadian newspapers, writing book reviews and op ed pieces on education, literacy, language, and a variety of other subjects. Her column on poetry, Poetic Licence, was a Montreal Gazette monthly feature in 2000-2001.

The author of several poetry collections, Robyn Sarah has also published two collections of short stories and a book of essays on poetry. Her poems, stories, and essays have appeared widely in Canada and the United States. She lives in Montreal's Mile End with her husband, photographer D. R. Cowles.