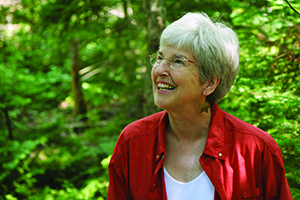 Jill MacLean is the critically acclaimed author of The Nine Lives of Travis Keating and The Present Tense of Prinny Murphy. Jill was honoured with The Ann Connor Brimer Award for Children's Literature for the first two books in the Travis Keating/Prinny Murphy series. MacLean also authored a collection of poetry, The Brevity of Red, which was shortlisted for the Atlantic Poetry Prize and the Acorn-Plantos Award, and she has published a history of Prince Edward Island, Jean Pierre Roma: of the Company of the East of Isle St. Jean.

MacLean's writing has always drawn on experiences in her life for guidance. Her books are set in Newfoundland, where her son and his family now live. Over the years, she’s canoed, kayaked, hiked, and snowmobiled there, travelled the coves by boat, and stayed in the outports. Little did Jill realize at the time that these experiences could all be called “research,” or that her love of the province would translate into words. Jill was born in England and now lives in Bedford, Nova Scotia.

The Hidden Agenda of Sigrid Sugden

Nominee for the The Hackmatack Children's Choice Award 2015

The Nine Lives of Travis Keating

The Present Tense of Prinny Murphy

The Brevity of Red (poetry)

For more information on Jill MacLean and her books...